Insider Tips on How to Manage Your Own Artist Career

Managing your own independent music career can be overwhelming to say the lest. Brian Dubb and his new service Centralized.me is here to change that! We caught up with the artist manager and tech entrepeneur to share some of his best advice.

According to research we made with MIDiA in early 2020, as many as 85% of self-releasing artists do not have a manager representing them. This means there’s a lot of talent out there navigating the music industry on their own. But how should an independent artist think when managing themselves? We caught up with Brian Dubb - artist manager and founder of centralized.me, a game-changing platform dedicated to helping people in music kick start their career.

Hi Brian! Tell us about yourself and the idea behind centralized.me?

I started out as a performing artist. Born in South Africa, raised in Australia, I later moved to London with my hard rock band. Fate took me around the world with a backpack and a guitar to record a solo album in friend's home studios. In Peru I met the now famous but then 16 year old Chilean musician, Nano Stern. I went from his creative collaborator to being his manager, with Chilean Juan Carlos Olivares, and together we took Nano from busking to 5000 tickets a night without any help from the mainstream music industry.

Soon I was managing many more artists and as a result my inbox, calendar and to-do lists blew up and I lost control of all the detail. It was then I developed MPAL PRO, one of the world's first management services companies, with a tech stack that was hacked together very quickly. The whole idea was to put the artist at the centre of control of their career, with all the boring stuff handled.

At the same time, the legendary and wonderful UK artist, Imogen Heap, had parted with her management and major label deals and was looking for a new way to work and to be in control of her destiny. It was a match made in heaven. I tore MPAL PRO down and rebuilt it to work with her complex set of activities.

The "💡" moment for Centralized came when I was talking about MPAL PRO to the talented and acclaimed artist and producer, Tamir Muskat, in his studio in Tel Aviv. He said about MPAL PRO, "This is the future of management! But why do this for established artists? There's millions of artists out there with no management and no access to this critical information and tools. Build an app for them!". He went back to his mix and I took a little minute to reflect on the beaten up lounge of his studio... Centralized was born.

Our first version was released in August 2019 and version 2.0 dropped last week.

Centralized.me 2.0 finds out where each individual artist is at in their musical journey and then suggests a plan that's tailored for them. It's everything they need to do next to move their music forward. And it explains how to do each thing. To make things move even faster with more flow, there's email templates for communications to the industry and deal terms explained in plain English.

Think of it as an interactive guide that creates a tailored plan on how to build your artist career - from releasing music to playing shows, having merch for sale, developing your brand and promoting, building your team and managing money and documents. Probably the most important step is the first one; Setting your Vision and Intention. Everything flows from there.

IMO, the industry has been lacking a central source of quality information for artists and new managers looking to shape their own careers. I wanted to gather all necessary information in one accessible place.

The Guide page shows a collection of tips and resources to help artists build their careers. 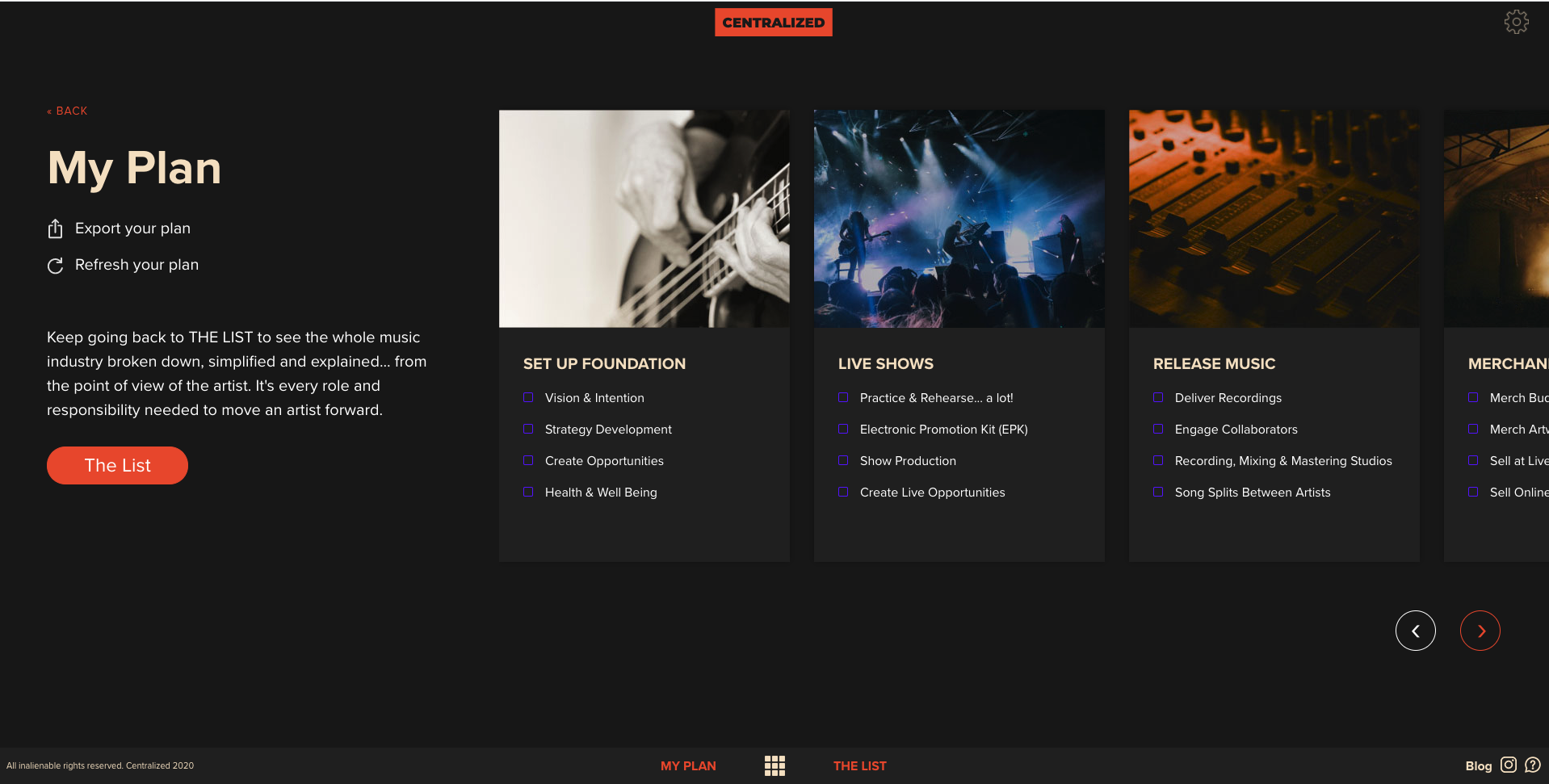 The Plan page shows the suggested plan for each user, tailored to their needs and where they are in their career.

What would you say are the first three questions self-releasing artists need to ask themselves to get going with building an artist career?

1. Is the music being prioritised? Because it MUST be. It's the core and the source of all the energy you need to move forward.

2. Have you found your own voice/sound? It's not an easy journey, but it's essential for your personal growth as an artist and the growth of your audience.

... so you either have one or both of those and are actively moving forward with them.... or you are developing them.

How would you say the music industry has shifted from when you started out?

Centralized is inspired by collectives and scenes of artists that got together to learn and teach each other about how the industry works. I'd heard about it happening in punk in the 70s and early 80s, but got to see it first hand in the underground electronic dance scenes in the 90s... and am seeing it again now up close with the Rize Nation collective led by woman in Kingston, Jamaica. But the sharing of that critical information was mostly limited to personal connections in those small local scenes. Thanks to technology, we're able to share this critical information and provide guidance to any artist, of any genre, anywhere in the world.

Especially now, when the corona virus looks like it might kill 90% of live venues, artists are in need of vital information of what to do and how to do it.

We are seeing innovations in the way people connect online via live streaming and events. But the live show is the last bastion of music that is music alone. The physical proximity between the audience members ... and between them and the music being created in the moment is elemental. So I'm not sure yet how financially viable or permanent some or all of that live streaming will be.

The flip side positive is of course is everyone sitting at home on their devices watching much more music with videos. That's only going to get bigger.

But it’s important to remember that 2 things stay the same no matter what music you play or where you live:

Read more and sign up for a free trial by clicking the button below.

Get a better experience in the Amuse app. Release your music, check your streams, withdraw money
Go to App Store