From Twitter to the Grammys: How Lil Nas X Changed the Music Marketing Game

In Artist Deep-Dive we unpack the rise and success of notable artists in the music industry, specifically focusing on their marketing techniques and branding.

Lil Nas X went from releasing music independently to winning six Grammys. How did he do it? Here’s how Lil Nas X paved his way into the music industry with the clever use of social media and relatable memes.

When Lil Nas dropped out of college in 2018 to pursue music, he took to Twitter to solely focus on building his audience and to promote his upcoming songs. He quickly found that his memes gained more attention than his music links. 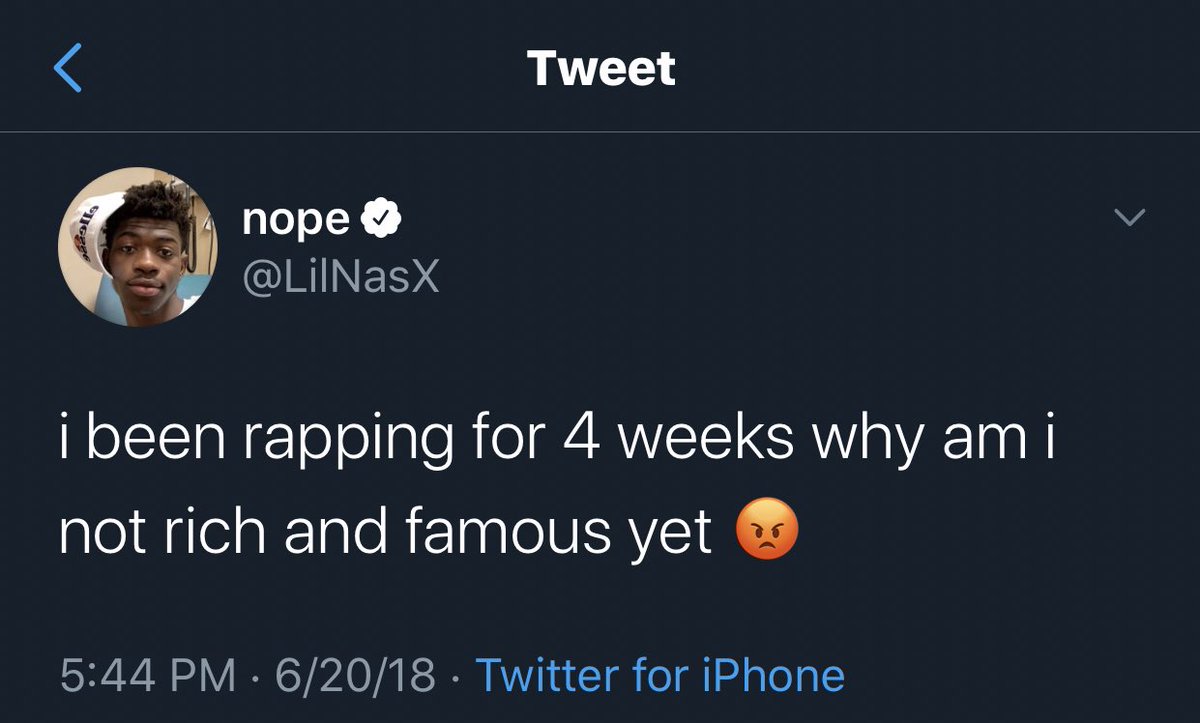 This led Lil Nas to stop dropping Soundcloud links and instead use his accumulating meme success as the front line of his marketing plan. He started getting (really) creative and solely writing songs that could easily be promoted through memeable* content.

This new creative splurge gave fuel to Lil Nas X single “Old Town Road”. If you generally ask people (who are somewhat active on social media) if they know of this song, they will have some recollection of it and most likely have a visual connection that comes to mind when hearing it. This wasn’t because Lil Nas got lucky or that the song itself was significantly extraordinary. Nas really did write this song with the idea to create a visual and humoristic relatability for it.

Right before “Old Town Road” was released Lil Nas tweeted “country music is evolving” with a meme of a cowboy dancing (😂) on December 3, 2018. He added to the thread shortly after with links to his new single. His audience loved it.

This meme went viral and so did his follow-up memes that included lyrics like “I got the horse in the back” or relatable text that made people simply laugh. Lil Nas X was making country music relatable and mainstream, with his song tied into the trending memes on Twitter. A user that at the time seemed like he jumped on the trend himself, has recently admitted that even his viral “Old Town Road” tweet was in actuality Lil Nas' idea, shared with him in a DM (genius).

“take your ex back or listen to country music?” pic.twitter.com/yTqd12nolB

Lil Nas X had found a working formula that sparked from an idea of making a song meant for meme adaptation.

So why did this have such a rippling effect on Twitter? It created an emotional (funny) and visual connection for anyone who then listened to the song. On top of this, it became a topic of relevance and even people who were out of the loop wanted in on the trend leading them to search and listen to “Old Town Road”.

TikTok launched at the end of 2017 and steadily grew into 2019 when Lil Nas’ single was still on its up-rise. “Old Town Road” became the perfect TikTok trend with #oldtownroad hitting the #fyp (for you page) time and time again. The single had already made waves on Twitter and continued its growth through the countless TikTok short-form video adaptations.

Only 5 months earlier Lil Nas was a college drop out, living on his sisters couch with no money to his name. Fast forward and his promotional hustle had paid off. He found himself charting on Billboard’s Hot Country Music chart but was then removed one week later, with “Old Town Road” being deemed as “not a country song”. This decision turned Old Town Road into a trending conversation around the world and later pushed it to #1 on Billboard’s top 100 for 17 consecutive weeks. Shortly after in March 2019 (after an intense bidding war), Lil Nas X signed with Columbia Records.

Lil Nas X made Twitter friends, built a strong, connected audience and made everyone laugh. But it was no fluke. It was carefully thought out, and creative promotional work.

u can literally scroll down my account and see my promoting this fuckin song for months. each accomplishment it gets just makes all this shit feel so worth it. i can’t stop taking about it.

What can independent artists learn from this? Let’s take an even closer look at what Lil Nas X did to get “Old Town Road” into the (massively) trending topic that it was.

Lil Nas didn’t stop at creating clever memes to “Old Town Road”, he assumed people would search for the trending parts of the song not knowing the title of the single itself. From this assumption he changed the song title on Soundcloud, Youtube and even included the lyrics from the viral videos on Reddit.

Pro Tip(💡): Packaging your song so that it’s relatable to anyone’s life is 🔑.

Since “Old Town Road”, Lil Nas X has continued releasing singles (that are memeable) like Panini (2019) and Holiday (2020), together accumulating over 573 million views - all thanks to him sticking to his formula and connecting each single with relatable content on his social media platforms (where he’s now got an audience of over 34 million followers).

Lil Nas has transitioned into not only using Twitter but also Instagram and TikTok to relate to his fans (and haters 🎉). He is well on his way on making his official debut album Montero a charting success, teasing his fans with “Montero (Call Me By Your Name)”, “Sun Goes Down” and “Industry Baby” so far, this year. Each one song that’s been released, tells a visual story and is packaged to create wide-spread conversations.

For example, when Lil Nas dropped “Montero (Call Me By Your Name)” at the start of 2021, the song became a trending topic across social media. Again, he utilized the controversy that was generated by the official music video and consistently posted memes and short-form videos on Twitter and TikTok -- engaging with users across both platforms that in turn shared their opinions on the release. Basically, he made himself into a meme and that urged other users on social media to take part in the conversation - cracking their own jokes through memes and short-form videos (all contributing to the promotion of his song).

Lil Nas even uploaded additional versions of “Montero (Call Me By Your Name)” on his Youtube channel, which turned out to just be (funny) click-bait - resulting in more exposure and ultimately pushing all his releases leading up to his debut album to trending topics shortly after they were uploaded.

The release date for Lil Nas debut album Montero has yet to be announced, but he did give us this Avengers inspired trailer.

All we know is that it’s “coming soon” and from Lil Nas’ past track record we expect to hear all about it across social media when “soon” arrives.

Stay tuned for more Artist Deep-Dives and in the meantime, take notes from Lil Nas X. Get creative, be daring and find your audience and your channel.